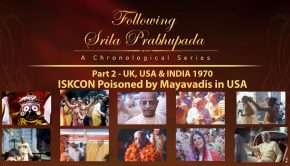 Regarding the poisonous effect in our Society, it is a fact and I know where from this poison tree has sprung up and how it affected practically the whole Society in a very dangerous form

The entire 1975 Philadelphia Ratha-Yatra from Srila Prabhupada's arrival at the airport. This video is a wonderful way to experience a huge Rathayatra festival with Srila Prabhupada 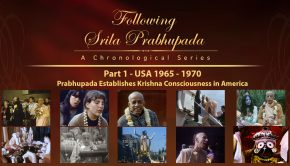 Part 1 of a chronological collection of films of Srila Prabhupada. Sound track by devotees appearing in the films explaining what is happening at the time

George Harrison and the devotees recorded the Hare Krishna mantra in 1969 and released it as a record. It went to the top of the music charts worldwide.

A pilgrimage, starting at the Bay of Bengal (Ganga Sagar), to Gangotri and Gomukh in the Himalayan Mountains where the Ganges appears.

The Golden Avatar provides a beautiful synopsis of the life and teachings of Lord Sri Caitanya Mahaprabhu who popularized the chanting of Hare Krishna.

Prepare for the Adventure… For inspiring occasional spiritual emails subscribe to the Bhagavad-gita As It Is newsletter at www.AsItIs.com 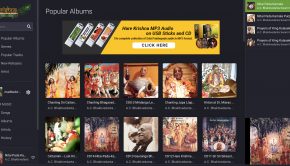 Prabhupada wanted to create Vrindavan in the United States. His vision was a self-sufficient rural community depending on the cows, the land and Krishna

Krishna — Deep in the Heart of Texas?

When you think of Texas you think of cowboys, oil and JR. But probably the last thing you would ever think of would be the Hare Krishnas 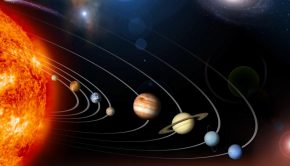 Only the Man Outside Knows the Truth

The globe earth is a good model, more than a story. It's a predictive model which passes most of the tests when you compare it with our actual observations

Visit Vrindavan — Land of Krishna — More than 40 Years Ago!

It is difficult for us to visit Vrindavan. So the film: Vrindavan, the Land of Krishna, has come at the perfect moment. Now we can have the darsana of Krishna's Vrindavan from our homes.

In 1969 we watched 'one small step for man, one giant leap for mankind' on TV. 3 months later I met Prabhupada. He insisted: "They did not go to the Moon."

A blind man was trying to get to his father-in-law's house. He asked a cowherd boy, Kindly lead me to the house of my father-in-law, I can't find it myself

'Here is a servant of Kali. He has got a tilaka and neck beads, that's all.' He does not know what is the philosophy

Man is the architect of his own fortune.

What India is suffering from is not poverty of the means of material existence. She is suffering much more from the bankruptcy of her spiritual resources. 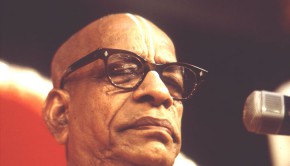 You have to take to the advice of Krishna. This is the purpose of Krishna consciousness movement: wholesale, thorough, overhauling of the human society