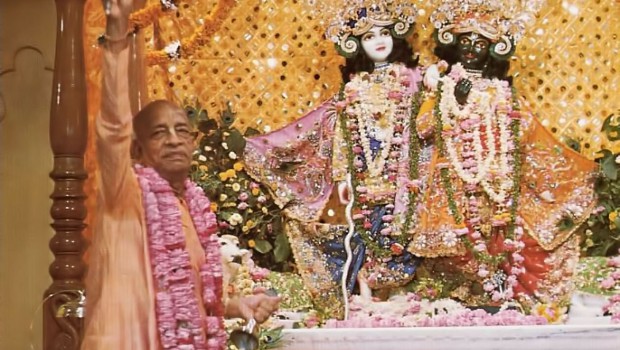 About two A.M. I was awakened by a terrific uproar. All the peacocks in Vrndavana seemed to be trumpeting their piercing cries, producing waves of sound that swept across miles of holy land to the other side of town, echoing back and forth. I rose, dressed, and went outside to see what was going on. Lo and behold, the truck with Krishna and Balarama had pulled in!

I was in Mayapur, in what is now West Bengal, when I received a letter from His Holiness Gurudasa Swami asking me to go to Jaipur to see how the carving of the twelve Deities for the Krishna-Balarama Temple was coming along. When I arrived in Jaipur, the sculptor let me stay at his home along with the twenty-five members of his household–three generations–all of whom helped with the carving.

My first look at the Deities was inspiring. The two that were almost finished were good, and I suggested only a few small changes–a slight enlargement of the eyes and a change in the cheek structure. I was going by my personal experience. Indian sculptors have their own tradition, but much of it has been spoiled by years of catering to modern tastes. I was trying to stick to the old tradition, where the image is considered beautiful only when it reflects the meditative mood of the sculptor and evokes that same mood in the onlooker. There are also strict rules about proportion, but they are secondary. A small deviation in the rules can remain as long as the Deity has the proper mood.

After instructing the sculptor on the few changes I wanted made, I saw two rough chunks of marble–one white and the other black–that were to become the Deities of Balarama and Krishna. I was spellbound. The two brothers were being carved in Their characteristic shapes, and just for fun the sculptors had put Them together the way They would appear on the altar, with Balarama’s elbow raised up to lean on Krishna’s shoulder and Krishna’s arms positioned to hold His flute. Enchanted, I felt I could see right through the white and black marble to the finished Deities inside.

A few months later, after a short visit to our clay modeling workshop in Bengal, I returned to Jaipur. This time I watched the sculptors finish all the Deities except the one of Srila Prabhupada. The first attempt wasn’t turning out too well, so I asked them to start over again. Then I took a train up to Vrndavana to be there when Krishna, Balarama, and the other completed Deities arrived. They were being driven up on a Golden Jaipur Co. truck named “Krishna,” which I thought very auspicious.

About two A.M. on the night the Deities were scheduled to arrive, I was awakened by a terrific uproar. All the peacocks in Vrndavana seemed to be trumpeting their piercing cries, producing waves of sound that started far off and then swept across miles of holy land to the other side of town, echoing back and forth. I rose, dressed, and went outside to see what was going on. Lo and behold, the truck with Krishna and Balarama had pulled in!

The workmen who unloaded the truck the next morning were very nice. All day long, every day, they’d chant Hare Krishna as they worked, and when some extra service turned up, they’d do it for nothing. And although their supervisor was a Muslim, he was very concerned about the Deities. “Be careful, be careful! Don’t break Krishna!” he would shout, perspiring heavily. The crew of Muslims and Hindus labored side by side, loudly chanting as they carried Krishna, and whenever they put a box down, they would cry out in unison, “All glory to Krishna and Balarlima!”

Next I spent about a month painting the Deities. The residents of Vrndavana soon learned about the new Krishna and Balaramma, and they would come to the window of the room I was working in to catch a glimpse of Them. But the Deities were always turned away from the window when I was painting, so the eager Vrndavanites would bang on the window grating with their sticks, saying, “I want to see Krishna and Balarama!” But they had to wait.

When the painting was finished, I returned to Bengal for another short visit and then went back to Jaipur a third and final time to supervise the carving of the last Deity–Srila Prabhupada. The work should have taken four days, but it stretched out to a full month. Not only was the sculptor very temperamental, but on top of that he spoke only Hindi, which I can’t speak. Although communication was difficult, however, by Krishna’s mercy the work turned out nicely.

Later on, in VrndAvana, I was painting the final touches on the Deity of,Srila Prabhupada’s spiritual master, Srila Bhaktisiddhanta Sarasvati Thakura, when Srila Prabhupada walked into the room to inspect the work. “Thank you very much,” he said to me. “But one thing,” he added in his gentle yet uncompromising way, “the lips should be a little more pink.” I gladly changed the color. After so many months of giving orders to sculptors, it was refreshing to take orders from a pure devotee of the Lord. 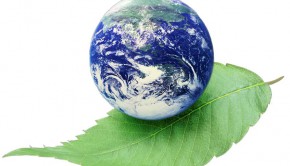 What is the Purpose of This World? →